Writer and rider Bill Farnsworth braves the winter temps and heads out to tackle some epic cycling in the stunning wilderness north of Toronto. 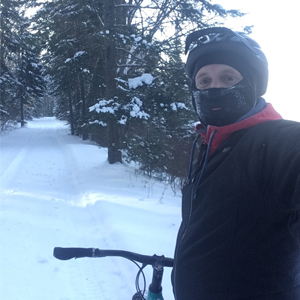 2018 marks the 125th anniversary of Algonquin Provincial Park. Although fortunate to have lived within an hour’s drive from Canada’s first provincial park for most of my life, I still have a lengthy list of Algonquin adventures to complete. Riding a fat bike on the Old Railway Bike Trail in winter was highly ranked, so I set out on a cold January morning to mark this historic anniversary and cross another challenge off my list.

The Old Railway Bike Trail follows the abandoned bed of the historic Ottawa, Arnprior, and Parry Sound Railway. The Algonquin portion of the trail was decommissioned in 1959 and the tracks were later removed to create the modern trail. Having started life as a rail bed, today’s trail is relatively wide and flat, making it well suited to winter sports such as Nordic skiing and fat biking. In the winter months, the trail is regularly packed and groomed, making it accessible to riders of all ages and abilities. The trail winds through a mixture of vast, open fields, travels through densely wooded forest and skirts the shores of several of the Park’s beautiful lakes.

2018 opened with some of the coldest temperatures on record and, despite waiting for what was forecast to be the warmest day, the temperature hovered at -20°C.

Having made a reservation in advance, I stopped in at the Huntsville location of Algonquin Outfitters to pick up the fat bike. The knowledgeable staff quickly familiarized me with my steed and had me out the door in no time. Heading east toward the park, the rumble in my stomach reminded me that no drive through the small village of Dwight would be complete without a stop at Erika’s bakery for a coffee and homemade baked treat. 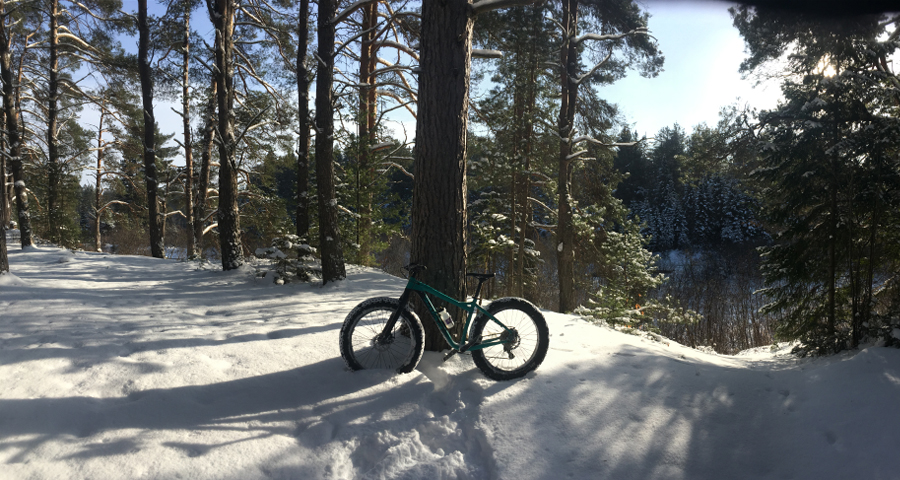 In the winter, Algonquin’s services are more limited, so I was sure to purchase my day pass at the West Gate on my way through. In the summer the Old Railway Bike Trail can be accessed at several points, but in the winter it can only be accessed at the Mew Lake Campground. As I drove quietly past snow-covered campsites, I was amazed at how many people were braving the cold to experience winter camping in the park. I even saw one intrepid adventurer with a tent! 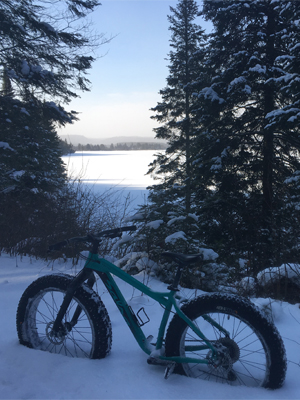 After unloading the bike I took advantage of the heated comfort station to get dressed. With the wind chill hovering around -30°, I knew that proper layering would be essential to my comfort and safety. Finally ready to ride, I threw my leg over the bike and began pedalling, watching the nearly five inch tires roll easily over the snowy road.

The trail itself is 16 km in length, with the Mew Lake Access located close to the halfway point. Excellent new signage was in place that made it extremely easy to situate myself and plan my travel direction. Opting to head south toward Rock Lake, I set off, eager to test both the bike and my skills on the groomed surface. The trail is wide enough that half of it is usually track set for skiing, so it is important to bike on the opposite side and be careful not to damage the ski trail. I began by travelling through a wide open field before heading into the trees. Soon I was riding along the shore of Lake of Two Rivers, with scenic vistas revealing themselves as the sun began to peek out from behind the clouds. While the trail had been packed by Park staff, recent snowfall meant that the surface was at times soft enough that my fat bike’s tires were put to the test. 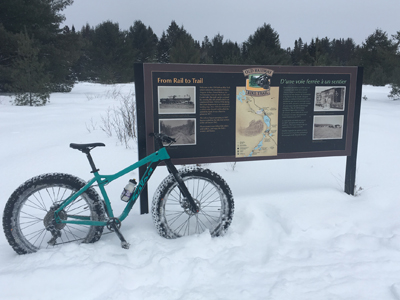 Stopping to enjoy the many signs along the route that offer insight into the landscape, wild life and historical significance of the original rail line, my ride was fast enough to be challenging with just enough breaks to make it truly enjoyable.

After six kilometres of riding I arrived at the fork in the trail at the Pog Lake Campground, where the trail crosses a scenic bridge and heads into the campground. The trail continues toward Rock Lake, but this portion was not as well packed and had only been braved by a pair of Nordic skiers. With the day getting colder I took a quick stop for hot chocolate and a snack and turned around. Riding back toward my car, I reflected on the difference between riding this trail in the summer and in the winter. I realized that fat biking was less about the speed and more about the experience. The slower pace allows the rider to sit back and enjoy the scenery while still getting in a solid workout. The landscape is even more beautiful draped in fresh snow and there are far fewer riders out on the trails. 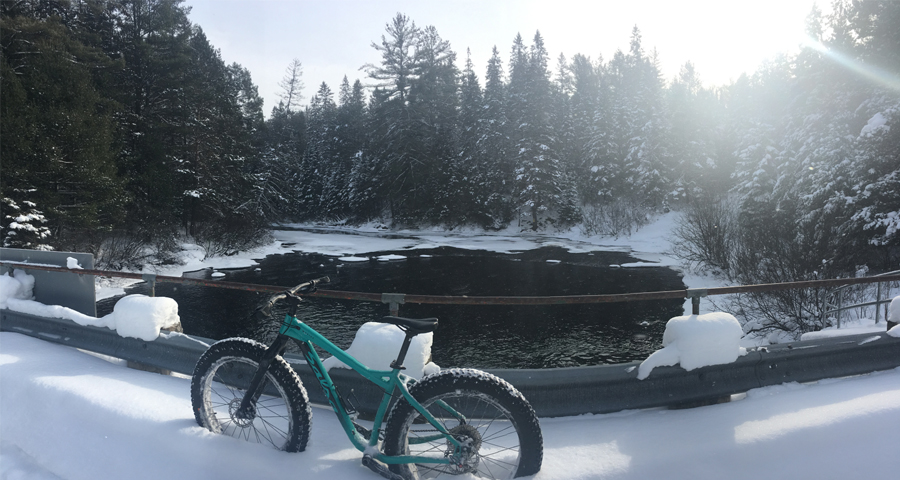 Even though it was an extremely cold day, when I arrived back at my car I realized that I couldn’t remember a recent ride that had given me the same sense of satisfaction as these snowy kilometres.

This winter, head to our nation’s oldest provincial park to fat bike the Old Railway Bike Trail for yourself. Whether you are new to fat biking or a seasoned veteran, the trail offers the opportunity to see a side of Algonquin that most people miss.

With plenty of oppor...